Thanks for all the kind comments and words of encouragement everyone! Don’t worry, I’m not going through some kind of mid-life crisis, depression, or anything like that. And like I said, I’ll get over it. I think we all have times like these sometimes. Work is still stressful but eh…it’s work. I guess it’s supposed to be that way.

Anyway, I noticed I haven’t posted in a while so I thought I’d give you all an update.

Pooh and I have been making awesome dinners at home the past couple nights! Pooh’s been on a roll with these amazing recipes from the internet. I’ll definitely do a post on Pooh’s great feasts soon! We also checked out a new restaurant called Cafe Bleu in Hillcrest. I’ll be posting about that soon too, along with a couple other restaurants Pooh and I visited! So much to post and so little posting time :)

Rawrr! Since I’ve been working out more, I feel more full of energy! Of course, I’m being realistic…I’m not going to see results (the results I want to see) any time soon.

Anyway, I hope everyone is doing well. Look out for my next post!

Some of you have been asking me “where’s tigguhh?!” Well, I’ve mentioned in a previous post that I’ve been having some insecurity issues lately. I can’t help but feel…ugly. I guess right now Tigguhh hasn’t really been in the mood to play.

I’ve always had a problem with high anxiety and lately it’s been acting up pretty bad. Work has it’s ups and downs but right now it seems to be way down there…and then some. After the holidays business has been extremely slow. I’m starting to wonder if maybe I should advertise my day job on my blog so I can generate some business…but I’m sure that might just lead to some trouble. I guess all I can do is keep working hard and think positive.

Anyway, on the bright side, Pooh has been helping me work out! So maybe Tigguhh might make an appearance sometime soon! Until then, I guess I’ll post a random Tigguhh archive image :)

I believe I posted these in a prvious post, but they were censored.

The following is intended for viewers ages 18+. If you are not of age please do not continue onto the rest of the post.

to Cal of Duty 4: Modern Warfare for the PS3! I’ve been playing multiplayer online and can’t seem to be able to put the controller down! I love it!

Apple just released their newest toy and my oh my it is beautiful! You can view the current ad here.

Posted in UNCATEGORIZED by Tiggah on January 14, 2008
5 comments 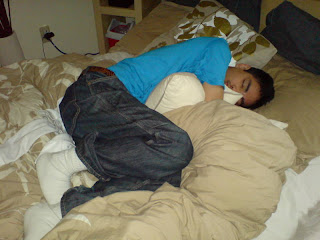 For those of you with a PS3 that who would like to add Pooh and I to your friends list. Our user names are groovapooh and tiggahtigz. We haven’t taken advantage of the online aspect yet so hopefully we’ll have a nice list of buddies so we can play via net!

Please comment with your user name and we’ll add you too!

Pooh’s making me a new banner for my blog. We had a test shoot to play with some ideas (sorry, Tigguhh didn’t take any pics). I’ve added them to my Flickr. The full set can be viewed here.

For those of you too lazy to click the link, here are a couple from the set :)

The full set can be viewed here.

Which one should Pooh use for my new banner?

Hmm…I could of sworn I posted this already but I guess Blogger decided not to post it for some reason. Oh well.

New Years Day, Pooh Tribal and I decided to spend the day out n about. We first headed to Downtown to do a bit of, well, what else…shopping!

I picked up a couple things…

2 pairs of shoes and a nice blue shirt from Adidas…

They were on sale!!! Wuhoo!

Afterwards, we randomly decided to go to Belmont Park so Tribal and Pooh can ride the rollercoaster.

Afterwards, we had Pho for lunch and then Sushi for dinner. It was a fun and productive New Years Day!

Pooh and I had some friends over on New Year’s eve to celebrate. In case you didn’t see the pics on my Flickr. I posted a few below.

It was awesome! We had some drinks, enjoyed appetizer, played RockBand….

It was only 9 o’clock…so we needed something to do to pass the time. Jaeger Bombs!

Pooh really wanted to get the PS3Eye. So we did. It’s actually very fun…especially when highly intoxicated!

It was almost time so we started pouring out the Champagne.

Tribal was a bit messy when he was pouring the drinks. Oh well…

We waited and waited….drank some more…and waited…and then…the count down!

But keep it thug…

But “Ey yo dawg. You gotta maintain!”

So after the countdown and we had our champagne…we wondered…what now? What’s there to do? Well…we did have a LOT of champagne left. We kind of over stocked our alcohol for the night. We bought 4 bottles of champagne, 1 bottle of vodka, 2 bottles of Jaeger (for Jaeger bombs), 1 bottle of Hypnotic and 1 bottle of Hennesy (for incredible hulks). We thought there’d be more of us but it turned out to be just me, Pooh, Tribal , and Tribal’s roomate RC. Tribal decided we should take shots of Champagne! Yum!

Oh and we also got a whole lot of snacks. We got a very nice jumbo shrimp cocktail tray thing from Whole Foods. We also got lots of chips, candy, deep fried stuff…you know, very healthy food to start off the new year. Tribal really wanted to get the Princess Barbie Rice Krispies Treats and Dora gummy snacks. lol.

Afterwards, we decided to drunkenly venture off to the suspension bridge in Hillcrest. oOoOooh creepy…

Well, that was my New Years in a nutshell…a long stream of photos nutshell. I hope everyone enjoyed their New Years. I wish everyone the best in the ’08. Cheers!

On Sunday, we decided to relax. Tribal had work in the morning so Pooh and I thought it’d be nice to just clean the house and chill. We spent the day playing our PS3.

Tribal met up with us later that night for dinner. We went to Convoy Tofu House. It’s pretty cute because their hot plates are shaped like little moo cows!

Pooh had Chicken Bulgogi. Tribal had the same.

I had Beef Bulgogi. MMMMMM! To be honest, I think Convoy Tofu House tastes much better than Tofu House.

It was a delicious dinner!